Alexandra Burke has said that she would give serious consideration to an offer to be a coach on The Voice UK. The talent show has already lost Jessie J and Danny O’Donoghue from its line-up, with will.i.am and Sir Tom Jones’s futures also looking uncertain. 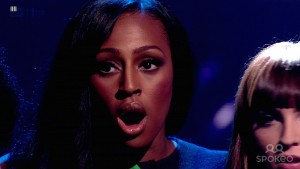 Burkey has said she’d be up for filling one of the vacancies, despite winning rival star search The X Factor back in 2008. “Yeah I would actually. I think The Voice is a great show, I’m actually a fan,” she told Cosmopolitan. “I actually think The Voice is absolutely fantastic show.”

She also voiced her support for Sharon Osbourne returning to The X Factor after a long break away. Alexandra’s series was the first one without her behind the judges’ desk. Alexandra said: “I’m a fan of the new panel actually. I think it’s going to be amazing.

“I’m over the moon that Sharon’s back. I absolutely adore her so it’s going to be great.” Alexandra is currently working on her third album, which she promises is out soon.