Media ‘personality’ Katie Hopkins will not be entering the Celebrity Big Brother house, it has been confirmed.

The so-called “rent-a-gob” had been rumoured for the new season of the Channel 5 show from the outset, but has taken to her Yahoo! blog to insist that she will be watching the new run with the rest of the public.

“We are only days away from Celebrity Big Brother 2014,” she wrote. “On January 3 the latest line-up of celebrities – or z-listers as we are more fondly known – are going to flounce into the house and fight like hell.” 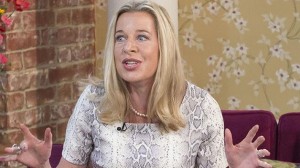 But despite insisting she isn’t going in, Katie didn’t appear completely against the idea.

“Many people call it career suicide, but every man has his price. Start talking the cost of my children’s school fees for life, and a few weeks living in a goldfish bowl with a bunch of egos starts to feel like a bargain.”

Slamming a certain person who is still thought to be going in, she went on:

“Sam Faiers’ pics always carry the caption; ‘TOWIE beauty – Sam Faiers’. It’s a bit like introducing Sarah Millican as ‘The very funny Sarah Millican’ – when she is clearly about as funny as thrush.

“Sam looks like a cat with particularly painful conjunctivitis. I may have a nose to rival Red Rum, but at least it is my own.”

However, despite denying that she’s going in, Katie added that she will be appearing on spin-off Big Brother’s Bit On The Side.