Katy Perry came face-to-face with Britney Spears for what could have been the first time last night, as the two pop princesses stepped out for the premiere of The Smurfs 2. Katy provides the voice for one of the characters in the animation sequel, and Britney performed the soundtrack song ‘Ooh La La’ – the music video for which co-starred her two young sons. 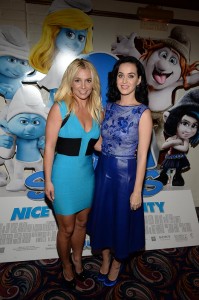 The pair shared a photo of their meet-and-greet on Twitter, with Spears writing: “So great to see you Smurfette @katyperry! Can’t wait for our Vegas date..” Katy was a touch more excited, writing in capital letters: “OMG!!!!! I CAN’T IM CRYING”

Katy decided against bringing her beau John Mayer along as her +1, opting instead for her hilarious grandmother Ann Hudson – who wore a T-shirt emblazoned with the words: “I’ve got the hots for Papa Smurf”. She accessorised with an amazing blinged-up cane. Britney, of course, bought her adorable sons.