Cara Delevingne (sort of) addressed her sexuality in a new interview.

The star was seen making out with reported girlfriend Michelle Rodriguez on several occasions earlier this year, but it is now believed that they have split. 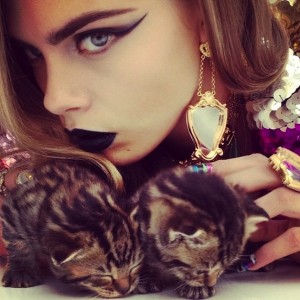 She told The Telegraph:

“The funny thing is, I always used to have more guy friends. At school, I was a tomboy and it would be me and all my guy friends. But now… I don’t know. It’s kind of changed quite a bit.

“I don’t meet men now who just want to be my friend. It doesn’t really happen that much. They’re just shallow like that. Unless it’s one of my girlfriend’s boyfriends, most guys are not like, ‘Oh, we should just be mates.’ I think it’s harder to become friends with guys… because guys just want to have sex with you.”

The newspaper notes that she “stops short of a full outing”.