Headline-hitting popstar Miley Cyrus will reportedly team up with pop icon Madonna for an upcoming performance. The Wrecking Ball star is reported to have lined up a duet with Madge as part of her new MTV Unplugged special, which is due to hit airwaves this week.

E! claim to have found out the news after photos emerged of the pair rehearsing together in Hollywood earlier this week, shortly after Madonna’s appearance at the Grammy Awards on Sunday night (January 26). 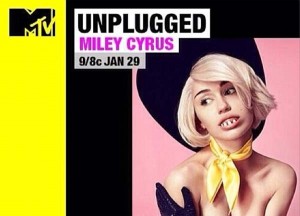 The ‘Material Girl’ star does not appear in MTV’s official statement, which indicates that – if she does pop up – it will have been organised as a surprise.

“The performance will showcase a more intimate side of Cyrus and feature surprise guests for an unexpected re-invention of the songs that have defined her career, including several from her No. 1 critically acclaimed album, Bangerz,” they said.

“Miley and her fans have always had an intimate and direct connection through her music, personality and no-holds-barred attitude and the Unplugged stage will serve as the perfect platform for her to show viewers what inspires and ignites her music and her passions.”