Ellen DeGeneres has admitted that she’s the inspiration behind hit 2000 comedy Miss Congeniality! The comic says in a new interivew with Parade that it was her who prompted the Sandra Bullock-fronted beauty pageant caper to be written. 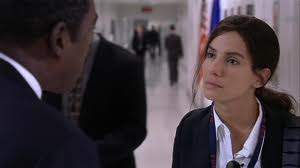 Miss Congeniality was a huge hit for Sandra Bullock (PR)

“Miss Congeniality was written based on me,” she claims.

“When I was getting ready to cohost the Emmys, the writer saw me [on TV] learning how to walk in a dress and heels. My stylist at the time — a man — was teaching me, and it was hilarious.

“The Miss Congeniality writer saw it and thought it was brilliant!”

She also confessed that she once beat Jennifer Aniston to a role back in 1999, for comedy EdTV.

“Jen Aniston is my friend and she recently ­reminded me that I beat her out of that. I got the part and Jen Aniston didn’t! That’ll probably be the only time that happens,” she joked.

Ellen is of course gearing up to host the Academy Awards on March 2.