Emma Thompson has given her verdict on social media – and it isn’t good!

The actress, famous for movies such as Emma and Nanny McPhee, joked that she’d rather be in the dentist’s chair for all eternity than join Facebook or Twitter.

“Listen, I’d rather have root canal treatment FOR THE REST OF MY LIFE than join Twitter,” she told Vanity Fair. “That’s not my scene at all.

“I can’t bear the thought of being connected all the time. God knows what it’s all doing to us. I hope that everyone does realize that we are all just one giant human experiment at the moment. We are just a great big bunch of little gerbils on wheels.

“In about 25 years time, maybe, a sudden generation will just drop dead. Everyone will just die on the same day. And I’ll say, ‘Oh, what do these people have in common? Hang on.They were connected every day 24/7, you know!’” 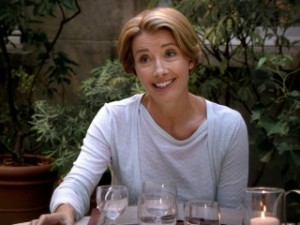 “And no one knew what it was going to do to them. No one knew! Because we didn’t bother to find out. Because we’re stupid! We invent stuff, we just fling it out there, we let anyone use it.

“A three-year-old could f*cking be on Twitter. A three-year-old! And then they go on and on and on about everything that there is. And get reviewed every day by Facebook. And then we will wonder why, at the age of 60, an entire generation chucks itself off a cliff like a bunch of lemmings.

“Actually, that’s the most likely outcome, don’t you think? It’s like, ‘I can’t take this anymore!’ It’s the lemming generation, I’m telling you.”

What do you think of her comments?