Rachel Bilson has paid tribute to The OC, the show that propelled her to stardom in the role of Summer Roberts. The show was a pop culture phenomenon when it debuted in 2003; paving the way for Bilson to star in films such as Jumber and the new series Hart of Dixie, which enters its third season in October. 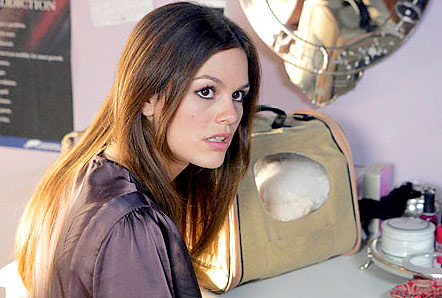 Rachel Bilson in The OC (screengrab)

Speaking to Cosmopolitan UK, she said:

“I didn’t have any idea how much The OC would change my life. I thought I knew everything, but now I look back and think, ‘You were a dumb-ass! What was your problem?'”

She was also asked what she thinks happened to Summer and her on-screen boyfriend Seth, who she was seen marrying in the series finale in 2007.

“Well, they got married [in the finale] and that was supposed to be a future episode. They’re probably still married in the OC.

Mischa Barton, Bilson’s former co-star, recently said that she’s glad to not be the focus of paparazzi attention anymore, saying:

“When you just want to go on vacation and you hear a twig snap and there’s a guy in a tree, it’s not relaxing. You can’t be a real person. So I’m happy things have changed.”